The vast majority of gamblers have their own luck superstitions. They follow them as their destinies depend on these sacred procedures without any doubt. Some of them carry a four leafed clover or always keep a rabbit foot in the pocket. Others just blow on the dices or wear special clothing.

Some of slot gamblers have their favorite machines, sits or even gambling areas. And all of them believe in fact that slot machine payouts and winning combination probabilities are highly dependent on slots luck superstitions.

In this article we will consider the most famous luck superstitions on slot machines gaming. 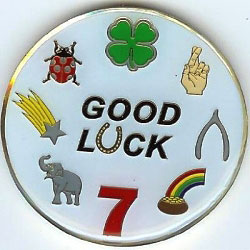