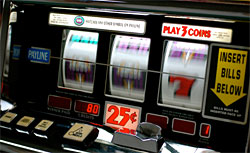 The slot machine technology features the next points for us to consider:

If you have studied the history of slots consistently, then it was not hard for you to recollect the original appearance of one hand bandit: the mechanical slot reels, the awkward look and noisy gameplay.

Originally it was look like the player fought with a giant creature, neither more nor less than. And it was a 120-years long way for us to introduce the flat screens with millions of colors and easy button clicks to launch the slot reels.

All modern slot machines use the original mechanic reels concept to display the game results and determine the game process. Nowadays the 3-reel slots are considered to be the standard game machines all the casinos are equipped with.

Let's try to understand how they really work.

Thus nowadays in most of the machines the slot reels and revels are present only as an entertaining and historical component of gameplay. And in practice the math rules it all.

The currency detector is the next device to consider. It deals with money actually: the accepting, count and delivery usually. So these paragraphs may be highly regarded by players who want to discover the slots money management in full.

The regular process includes the currency examining and works out the banknotes and coins as well. In case with coins - the currency detector evaluates them based on its size, weight and/or magnetism. Special optic devices are also used to scan the coin images and thus prevent cheating.

Some decades ago the currency detectors possessed lots of problems in their mechanics and in addition were easy to cheat. But nowadays technologies let to avoid these bad factors and players disturbance as well.

It has already been mentioned that the RNG influences the scores of slot reels and game results actually. It's a special microprocessor which runs special software generating the numbers non-stop.

Special algorithm secures the RNG work and thus provides players with fair-play rules - the same for all.

Thus the time you push the button - the score of your round play is generated. The machine selects randomly generated number the moment you stop the spinning, compares to slot machine lookup table (each stop number possesses its own reels scoring combination according to this table) and shows this combination on display.

The game procedures are open and obvious indeed - as well as slots gaming in whole.